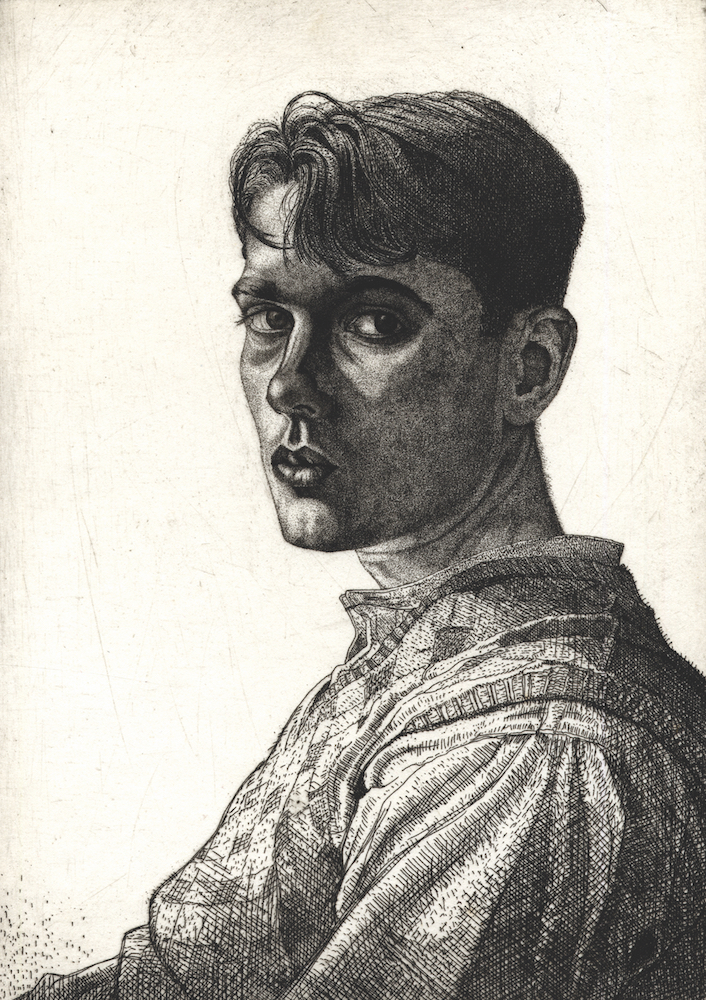 THE 2008 DEATH OF EDGAR HOLLOWAY MARKED the passing of the last surviving artist who flourished as a printmaker during the ‘Etching Boom’ of the 1920s and 1930s. A miner’s son and child prodigy, Holloway was a teenager when he first enjoyed success in the early 1930s. A self-taught printmaker, he was etching and printing the plates on his own press at fifteen, selling 10-shilling impressions from a bicycle that he peddled throughout his native south Yorkshire. His father enrolled him on a correspondence drawing course, arranged letters of introduction into the art world and moved the family from Doncaster to London.  By the age of twenty, Holloway staged two solo exhibitions in central London, his work had been purchased by the British Museum and the Victoria and Albert Museum, and his sitters for portraits included T. S. Eliot, Stephen Spender and Herbert Read.

Holloway’s anecdotes of key figures of the art world during the inter-war years – among them, curators Campbell Dodgson, Martin Hardie, and Malcolm Salaman, and printmakers John Copley, Paul Drury, Ernest Lumsden, and Joseph Webb – provided fascinating and invaluable insights into a unique period in the history of British printmaking.

During the 1920s there had been an unprecedented demand for contemporary etchings, though Holloway began a little too late to gain financially from the available opportunities.  In search of marketable subjects, he made expeditions into the countryside armed with copper plates and a needle. Back in his studio he followed Ernest Lumsden’s seminal 1924 book The Art of Etching, printing editions of popular landmarks and prospects like his 1930 drypoints Lincoln Cathedral, Fountains Abbey, and The Mansion House, Doncaster. In 1931, Lumsden purchased several etchings and invited Holloway to become a member of the Society of Artist Printers in Edinburgh. The young artist’s work also attracted the attention of influential etchers such as Muirhead Bone, Francis Dodd and James McBey.

By 1931 Holloway was in London making a modest living undertaking portrait commissions and selling watercolours and prints of such popular subjects as Eastcote (1932) and Essex Street Water Gate (1934). In 1935 he met the Scottish painter-printmaker William Wilson. They became close friends, travelling together in the UK and Europe. For six months they lived and worked in Essex, bought an etching press and spent their days drawing, painting and printing. Bosses Farm and Latton Priory, both etched in 1936, convey mood and atmosphere through dramatic light, extremes of weather and the expressive use of mark making. By now, Holloway had abandoned his summary linear approach to build up the image in a densely etched, painterly application of line.

Exempted from military service, Holloway held teaching posts in Shropshire and London, drawing views of the blitzed capital. In 1941 he converted to Roman Catholicism and became interested in the writings of Eric Gill. He visited Capel-y-ffin in the Black Mountains where Gill had lived in the 1920s. There, Holloway met Daisy Monica Hawkins, Gill’s model for Drawings from Life (1940).  Holloway began a series of portraits of Daisy Monica. Six weeks later they married.

To support a growing young family, Holloway returned to Doncaster and worked as a sign writer. In 1949 he accepted an invitation from Philip Hagreen to join the Guild of St Joseph and St Dominic, a community of Catholic artists founded at Ditchling by Gill and Hilary Pepler in 1918. Gill’s views on the status of the artist within the community and the role of art shaped Holloway’s attitude towards craftsmanship. For the next twenty-two years, he was a graphic designer, undertaking commissions for lettering, cartography and dust jackets for Britain’s leading publishers. In 1957, not foreseeing that he would ever again take up etching, he sold all but eleven of his copper plates to a scrap-metal dealer.

Though Holloway returned to watercolour painting in 1969, his passion for etching was undiminished. Demonstrating an ease and facility born of maturity, his lyrical landscapes of the South Downs, Wales, Spain and France became larger and more expressionistic.  Liberated from detailed observation, he became open to experimentation with etching processes. Between 1972 and 1975, he was commissioned to make watercolours and etchings of the industrial heritage of Troy, in Upstate New York.

Daisy Monica died in September 1979.  During long periods at home nursing his wife, Holloway took up line engraving working under the influence of his friend Philip Hagreen.

Holloway will best be remembered as an etcher of portraits, for nowhere is his keen observation and technical virtuosity more evident.  During a lifetime of study and self-analysis, he made more etched self portraits than any other British printmaker. With a consistency and conviction comparable to that of Rembrandt, he drew himself in various guises, using bodily gesture and facial expression to suggest different aspects of his personality or state of mind, and over time responded to the aging process. They form a pictorial autobiography. His first self portrait was a drypoint of 1931, aged 16, and his most recent The Fedora, his thirty-third, was etched in 2002, at age 88.

In later years Holloway was fortunate to witness a new enthusiasm for his work as he rose on the tide of interest in prints of the ‘Etching Revival’. In addition, his association with, and portraits of eminent writers and artists, his marriage to Daisy Monica, and his membership of the Ditchling Guild all played a part in drawing the attention of scholars to the artist and his work. His drawings and prints continued to find their way into public collections from the British Museum to New York Public Library.

From 1979 he staged a succession of solo exhibitions in Britain and America. As new commissions followed, the revived interest in his early etching fueled his desire to make prints. The Ashmolean Museum, Oxford mounted a retrospective exhibition of prints in 1991.  That year, almost sixty years after his first unsuccessful application at age eighteen, Holloway was finally elected Fellow of the Royal Society of Painter-Etchers and Engravers.  National touring exhibitions followed in 1994, 1999, 2001 and 2004.  In 1996, Scolar Press published Robert Meyrick’s A Catalogue Raisonné of Etchings and Engravings by Edgar Holloway.

In November 2008, The Times, The Guardian, The Telegraph and The Independent newspapers carried full and half page illustrated obituaries of Holloway. In 2009, there followed an exhibition of his watercolours at Monnow Valley Arts, while at Abergavenny Museum ‘A World Untouched’ explored the work of Eric Gill, David Jones and Holloway at Capel-y-ffin. The RE mounted a small memorial exhibition at the Bankside Gallery. Aberystwyth University, which along with the Ashmolean holds the UK’s largest public collection of Holloway’s work, celebrated a life’s work in the context of his Etching Revival contemporaries: Graham Sutherland, Bouverie Hoyton, Paul Drury, Webb, F. L. Griggs, and Gerald Brockhurst.

Such exhibitions represent the culmination of a resurgence of interest in Holloway’s work as an etcher and watercolourist. While his work stands apart from much contemporary art, he acknowledged and reinforced a sound art historical tradition, as evidenced in 2009 when the Rijksmuseum, Amsterdam purchased Self Portrait No.7  for Holloway had taken his inspiration from Rembrandt.

Holloway was fortunate to witness the art world turn full circle and observe his prints attract the public acclaim they deserved.